Think of your question first...

This is a tribute to the original Magic 8 Ball and the 20 original 8-ball answers we all love and remember.

This is a relationship Magic 8 Ball. Ask yes or no questions about love interests!

Unlike the famous original, this fateball is more balanced with an equal number of positive and negative answers. 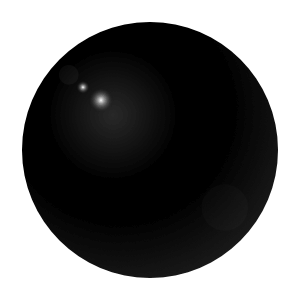 What is an Online Magic 8-Ball?

Pretending for a moment that you don't know what a Magic 8-Ball is, even after using the free online 8-ball above, here's the textbook definition:

The Magic 8 Ball is a popular fortune-telling novelty toy manufactured by Mattel, Inc. Consisting of a liquid filled plastic ball, with a plastic polyhedron floating inside, the toy randomly displays answers to simple "Yes and No" questions through a clear window on one side.

Using a Magic 8 Ball is simple: Simply ask a "Yes or No" question, shake the plastic ball and turn it over to see your answer "magically" appear. Within seconds, the clear window randomly displays one of twenty possible answers.

But that mundane explanation can't possibly describe the special place that the Magic 8-Ball has held in the hearts of kids for generations.

The Magic 8-Ball was the toy that made you and your bestie laugh, again and again. It was the magical confidante you secretly turned to, to ask the questions you didn't dare ask out loud. And it was for many of us, the first time we ever considered the idea of "psychic powers" or fortune-telling, as we peered deep into the unknown of its magical blue liquid.

Sometimes eerily accurate -- and often hilarious -- the original Magic Eight Ball was a staple of Christmas and birthday presents for generations.

There's a reason this grapefruit-sized, black plastic novelty toy is still one of the best-selling gifts for both kids and adults, year after year:

Before Online: The History of the Magic 8-Ball

The history of the Magic 8 Ball dates back to 1940's Minneapolis where the ball's predecessor "The Syco-Seer" was invented by a local fortune teller, Mary Carter who used it for somewhat questionable "seances".

The original design Magic 8 Ball used in these seances was actually a long, liquid-filled tube with a window at the top.

In 1948, Alfred Carter, son of the Syko Seer's inventor, created the first mass-produced commercial version based on his mother Mary's clairvoyant device.

Carter called it the "Syko Slate". His novel spherical design was the first "ball" version of the product, although it looked more like an iridescent crystal ball than the classic 8-ball from billiards tables we know today.

Carter produced his fortune-telling toy with help from store-owner Max Levinson and his brother in-law, engineer Abe Bookman. Together Carter and Bookman would form the novelty company, Alabe Crafts, Inc. Their first product would be called the "Miracle Home Fortune Teller". 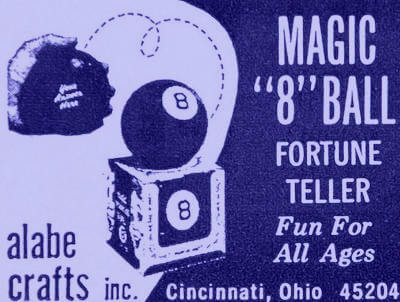 Despite its originality, Alabe's original product was not a commercial success, and Carter died before his creation found its way to the hands of millions of children worldwide.

But a design-revision made a few years later, would see sales absolutely soar:

In the 1950's, the Brunswick Billiards Company commissioned a promotional version of the Syko Seer from Alabe which looked like an eight ball from their billiards sets. 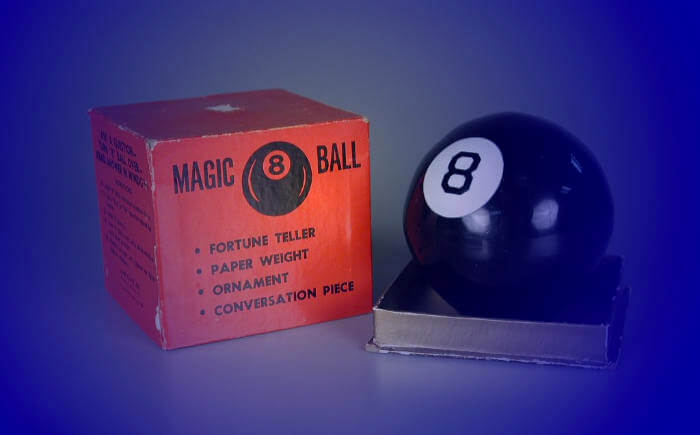 While some historians disagree on why exactly Brunswick Billiards chose the 8 ball concept, there is some evidence to suggest that their promotional idea may have come from an episode of The Three Stooges, TV comedy show.

In a classic Three Stooges film titled "You Nazty Spy", the comedy trio consult a "magic ball" which looks like a large billiards "eight ball".

Was this video clip the origin of the Magic 8 Ball? Be the judge yourself -- here's the Three Stooges sketch below:

Who makes the Magic 8 Ball?

Over the years, the ownership of the Magic 8 Ball has changed hands many times. Since the original version manufactured by Alabe Crafts, successive owners were Ideal Toy Company of Brooklyn, as well as toy-industry giants Tyco and Mattel -- the latter of which currently owns the rights. 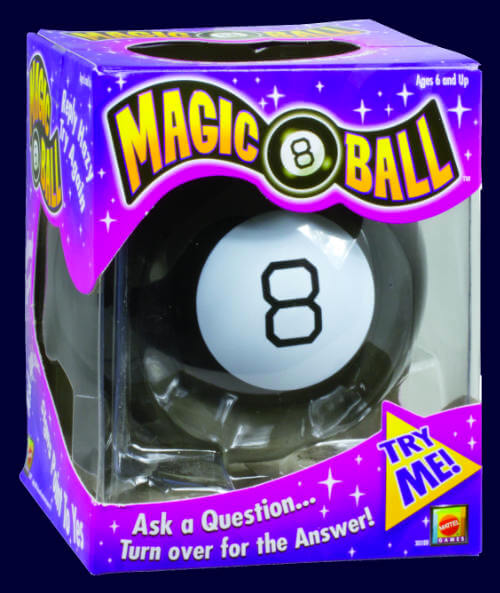 (Looking for a Magic 8-Ball? Here's the real deal, direct from Mattel -- available on Amazon.)

Despite the fact that the toy is now the better part of a century old, it's still an extremely popular birthday gift and Christmas gift, with nearly 1 million Magic-8 Balls sold every year.

Here is the complete list of original Magic 8 Ball responses:

As shown above, the original Magic 8-Ball has a total of 20 random answers. The breakdown of the original answers is: 10 positive, 5 negative and 5 neutral. In other words, you're far more likely to get a positive answer than a negative one.

Now you know why you had a happy childhood.

NOTE: If you're looking for a more balanced set of Magic 8-ball responses, try the "divination mode" on the free Fateball application at the top of the page. Divination mode has an equal number of positive and negative answers, and a slightly lower chance of a neutral answer.

Does the Magic 8 Ball Really Work?

Surprisingly, a commonly Googled question is "Does the Magic 8 Ball work?". To which we can only say that any divination tool like the Magic Eight Ball is simply a dumb object (or collection of objects, like Tarot Cards) without the added experience of the individual user. It's the human experience that gives all divination tools their magic.

But this being iFate, we have to take a critical look at the divination potential of the Magic 8-Ball: As a divination device, the Magic Eight Ball is lacking on at least one key level: It's biased towards the positive.

As countless smart kids figured out over the years, positive answers are twice as probable as negative ones.

When asking about anything from winning the lottery to future jobs, you're always better off framing your question in the positive, than the negative.

Because the original set of 20 Magic Eight Ball responses is strongly biased to the positive, iFate's custom "Divination Mode" is set to correct that imbalance.

When using the online Magic 8-Ball app at the top of the page in "Divination Mode" there are a balanced number of 7 positive, 7 negative and 6 neutral answers.

Be warned however, with balancing comes a higher than usual number of negative responses if you're used to the overly positive classic 8-ball.

Due to popular requests, our updated "Love & Romance" Magic Fateball uses a set of custom Magic Eight Ball Responses meant specifically for "Yes or No" questions about dating, marriage and romantic issues. Like the original Magic Eight Ball answers, we've kept the tone lightweight and fun.

If you're looking for more serious or straightforward advice on romantic issues, try iFate's more traditional online tools like our Love I Ching or one of our many love-themed free tarot readings.

For most of us, the eight-ball was our first, child-like foray into the world of divination. Some kids thought of it as a simple toy. Other kids assigned the black plastic sphere otherworldly properties and peered deep into its dark liquid mysteries. Whether it's a conduit for paranormal activity or just one of the greatest children's toys ever made, is up to imagination of every young player.

No one can argue however, that the novelty toy is a part of Americana that has its roots deeply entwined not just in American culture but the global toy industry.

In 2019, Mattel Films, in collaboration with independent studio Blumhouse Productions, announced the production of a Magic 8-Ball movie. Jeff Wadlow of "Truth or Dare" and "Fantasy Island" fame is attached to direct already, and will script the film with script masters Jillian Jacobs and Chris Roach.

While Mattel Films is slated to produce a host of other titles based on its properties from Hot Wheels to Masters of the Universe, we here at iFate are obviously most excited for the title that brings our first childhood fortune-telling and divination experience to life. The film is targeting a 2021 release.