The first tarot decks were created between the years 1410 and 1430 in northern Italy. Some historians trace the tarot to ancient Egypt.
browse more tarot readings
More iFate Tarot:
Tarot Card Meanings   |   Your Tarot Horoscope
Tarot Card of the Day   |   Yes or No Tarot!   NEW!
List View: Choose from a list of tarot spreads.

Welcome to iFate's free tarot readings. If you're a beginner or an experienced tarot reader, these readings provide free insight and fascinating perspectives on life, work, romance or any question or situation you can think of. 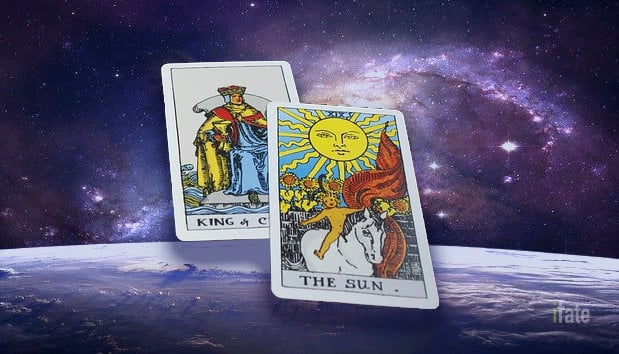 If you're new to reading tarot, think of this one page as a crash course or a bootcamp to help you get started learning tarot quickly.

Want to look up the meaning of a tarot card? iFate's tarot card meanings are detailed and easy to understand

To start, select a tarot spread from the choices above. Each spread provides you with different approach to your specific question — and each spread has its own strengths and weaknesses.

We recommend that tarot beginners start with an easy tarot spread that uses a smaller number of cards. The simple "Past, Present and Future" tarot spread is a great place to start your tarot journey if you're just beginning. As you grow more confident with the tarot, you can work your way up to advanced tarot card spreads like the well-known "Celtic Cross" tarot card reading which uses 10 cards.

Online tarot readings are no different from physical tarot readings. They offer insight, spiritual guidance and sometimes brilliantly insightful answers to your most important questions.

Before asking your question, it helps to relax and to think of the many dimensions within your current situation: Who are the players involved? What are the forces involved? How is this issue affecting your life?

When you are finally ready to consult the tarot cards, clear your mind and move on to shuffle the deck. When shuffling the deck you may see a card drop from the deck. This is normal. If it happens, try to remember the card that drops as it may have some significance later. Some tarot card experts pay special attention to events like this, others do not.

When you draw the tarot cards, carefully move across the cards and wait for a "pull" — or a feeling that a particular card is significant. The pull in an online reading is no different from the pull in a physical tarot reading. Like any other tarot reader, an online reader attempts to create a synergy between their higher mind and their physical actions.

Don't select a card until you feel that the card has some significance to you. As you practice using tarot cards, you will learn to get better at identifying this psychic pull from the cards. When you feel a psychic tug or a feeling over a specific card, choose that card and repeat the process When you have finished drawing all the tarot cards in your spread, you're ready for your reading.

How to read tarot cards

While entire books have been written on the art of tarot divination and tarot reading techniques, the craft can be surprisingly simple to learn at a beginner level.

DEFINITION: A tarot card spread is a specific arrangement of 2 or more tarot cards. In a spread, each position represents a different facet of the question being asked. The card filling the position should be interpreted only in the context of that position's meaning. Most tarot readers will also assign meaning cards which are adjacent or opposite to each card. These neighboring cards are often (but not necessarily) seen as relevant forces either supporting or opposing the position.

When you are interpreting each tarot card, don't forget to consider to the "Arcana" of the card. Each card falls into two groups. Major Arcana cards tend to be very important and indicate major messages or themes within the reading. Minor Arcana cards tend to have more common meanings and often indicate more day-to-day themes, emotions and events. (This is not always true, but it is a good rule of thumb to begin with).

The suit of a tarot card can often give us a quick indication of what the card is referencing.

There are often many ways to interpret each card so it's important not to simply take the face value of each card, but instead to think about how each particular tarot card relates to the position in the tarot spread, and to the overall tarot question at hand.

Another dimension to the tarot reading comes from the relative astrological signs associated with each suit of the minor arcana.

When analyzing a minor arcana card as part of a tarot reading, don't forget to consider that the card may be referencing a particular zodiac sign, or a person of that zodiac sign. This is particularly true with court cards and other cards that depict people in their visual references.

Tarot cards can also be read in their "inverted" or "reversed" meaning. When tarot cards are reversed the meaning of the card is altered. 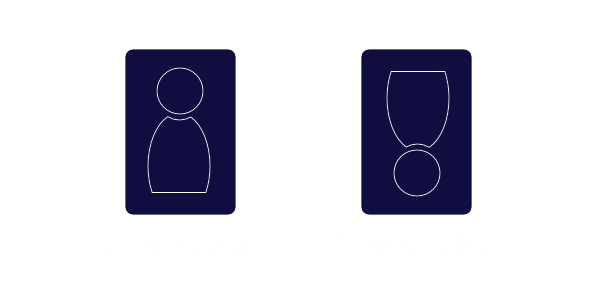 Are these reversed tarot card meanings bad? No. In fact, sometimes they make otherwise gloomy cards much "less bad". In other cases they may mean that the positive forces indicated by the card are being opposed or challenged somehow.

Beginners who begin learning how to interpret reversed tarot cards often make the mistake of 'flipping' the meaning to an opposing meaning. This is an overly simplistic (and usually wrong) approach. It's important to remember that inverted tarot cards do not usually have the exact opposite meaning of the traditional upright meaning. Instead, the meaning of inverted tarot cards should be interpreted as a failure, disruption, lessening or discontinuation of the upright meaning.

There is an ongoing debate among many tarot readers whether beginners should use inverted tarot meanings at all. If you are just learning to read tarot cards, it may be easier during your learning process to ignore the inverted meanings and read all tarot cards in their upright state. Once you have mastered the basic tarot meanings, you can always add the additional dimension of inverted cards at a later date

It's also important to look carefully at the visual imagery within a card. Many novice readers forget to look deeply at each picture and consider what is being said visually. Is there a reference within the picture that looks similar to anything in your life?

The gender of the card is also important: Does the card seem to reference a man or a woman? Does it reference a family? Are there animals in the tarot card? What time of day is referenced in the card? All of these visual elements should play a role in your tarot interpretation.

Also, keep in mind that many of the symbols in tarot cards have significance in astrology, numerology and many other disciplines. So the more you learn about related fields, the better your tarot card interpretation will become.

Tarot cards have changed dramatically over the years. Early decks like the early, hand-painted Visconti-Sforza Tarot had strikingly different artwork than many contemporary decks. The cards used by iFate Tarot feature the classic tarot early 20th century artwork of Pamela Coleman Smith. This artwork, previously published as part of the Rider Waite tarot deck, features some of the most famous and best known tarot card imagery ever made.

While there are many excellent decks available, including the Aquatic Tarot, Thoth Tarot, OSHO Tarot and many others, the classic 1909 artwork used here remains some of the most enlightened and subtle ever made. While iFate may add different tarot decks in the future, the classic Coleman Smith artwork has delivered trusted tarot readings to millions of fans worldwide.

Some tips on asking a tarot question

Needless to say, if you ask: "What's the winning lottery number on Saturday" you're going to have a very difficult time interpreting the results. That kind of question is not what tarot is for. Skilled fortune tellers understand that tarot works by helping the reader understand a situation. Not by telling you what to do directly.

A more common mistake however is to ask a good question, but to frame it in a way that makes it difficult to interpret the tarot results. Tarot readings are excellent tools for providing insight and understanding to a question, and (at times) providing insight into the future of a situation. The more you practice with tarot, the better you will become at the latter.

Open-ended tarot questions play to the strengths of the tarot deck and leave your mind open to the endless possibilities that tarot opens the door to. Good topics for tarot questions include love and romance, career and fortune, and health and medical decisions. Don't just focus on the "answer". Focus instead on all the circumstances surrounding the question being asked.

Don't worry if your first few readings seem a little confusing. Performing accurate tarot readings, like all skills, takes years of practice to master. If you're a beginning reader, try simple 3 card spreads or even 1 card tarot and Yes No Tarot readings before you tackle the larger spreads like the Celtic Cross spread. Many readers don't tackle larger spreads until they have been reading tarot for many years.

Most of all, tarot cards are a tool for spiritual introspection. Tarot students should remember to respect the tarot. Just because you have learned to render a surprisingly accurate reading on demand, doesn't mean you should ask frivolous questions or ever misuse the deck.

From that perspective, an online tarot reading is an authentic reading like any other. You are still contemplating the cards, waiting for a "pull", and adding your own creativity and insight into the results.

Sometimes tarot cards online can feel impersonal or too "digital". If this is the case for you, you may want to think of online tarot cards as a training resource. Many tarot students use online tarot card readings to get a general overview of how tarot cards work, and leave the actual "divination" to live tarot or physical readings.

For many professional tarot readers, their "first deck" was digital. And from there they moved over to physical tarot cards as a matter of personal preference.

Ultimately the choice is yours. Online tarot cards are capable of delivering deeply insightful readings full of depth and personality. How you use them is your decision. Whether you use digital tarot cards as a tarot teaching or training tool, or whether you perform a daily 3 card tarot spread to predict the outcome of daily situations -- is up to you.

If you enjoy iFate's tarot card readings online, be sure to try iFate's free Yes or No tarot readings which are perfect for quick yes or no questions.

Also be sure to stop in over at iFate's extremely popular I Ching readings which make understanding the I Ching easy for beginners.