The Meaning of Hexagram #16 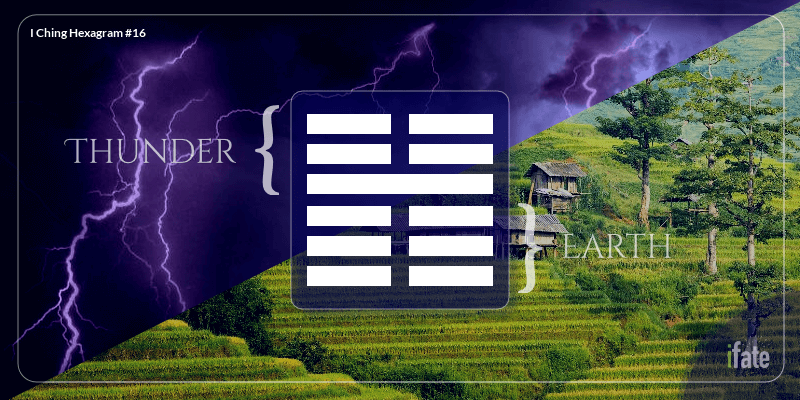 Hexagram number 16 with only one solid line indicates approval and enthusiastic support for actions and decisions. One strong line exists among many weaker supporting lines. In matters involving group decisions, consensus will be reached, and a single point of view will be shared among many. In personal matters, a choice will be respected, admired or obeyed. Unity is referenced here. Many act as one, because the one acts with confidence and clear leadership.

NOTE: Wondering how I Ching hexagram #16, "Earth below Thunder", applies to love and romantic relationship questions? See our special Love I Ching interpretation for hexagram #16

Satisfaction should sometimes be kept to oneself. To take pleasure in things such as the misfortune of others brings misfortune in itself.

Approval can be used as a form of flattery. One who seeks approval often opens oneself up to manipulation and negative external forces. A change in this line suggests that a firmness of resolve will win the day. Be wary of placing too high a value on the approvals of others. Instead, value inner resolve.

To seek approval while doing nothing to earn it is a fool's errand. Approvals must be earned, and those who expect something for nothing will be deeply disappointed. Prepare to work for approvals which are sought.

This is the only unbroken line in the hexagram of "Approval". It represents one whose approval is sought after. A change in this line represents a potential loss of confidence, or a movement away from this status as the "giver of approvals". The message here is to remain confident. Your original path is true.

Problems persist and refuse to go away. And yet the problems do not prevent forward action. Health problems may be referenced here.

Seeking pleasure and approval in a place which has no merit will lead one to misfortune. One has become obsessed with the wrong thing. A reversal of goals or a shifting of priorities is recommended. The current course is a dead-end because its goal has no merits.

The Two Trigrams Within Hexagram #16

The enigmatic trigram representing thunder is an energetic mix of power and mystery. According to Chinese lore, thunder is often associated with the might and mystery of dragons. The trigram of thunder is also called the "The Arousing" and points to intent, motion and initiative. It is a building block of unbridled energy and forward progress. It may also refer to an 'eldest son' or the map direction north.

Try a free I Ching Reading


iFate's free online I Ching readings have been called "beautiful", "profoundly insightful", and have received high praise from all over the world.
Click here to get started. »