The Meaning of Hexagram #2 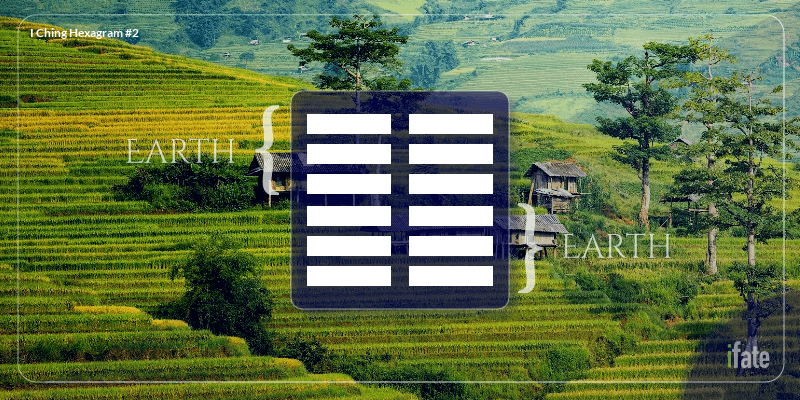 The Receptive is the hexagram denoting "devotion" and the spirit of the Earth. Fertile ground is required for creation. The hexagram of "the receptive" often has a strong female meaning, but can denote a powerful relationship between either a man and a woman, a father and son or between friends. A conscious act of devotion and a willingness to stand by that person, principle or force which sustains us, guides us or fills us with energy.

NOTE: Wondering how I Ching hexagram #2, "Earth over Earth", is interpreted for questions about your relationship? See iFate's popular Hexagram #2 Love I Ching interpretation.

"The Ice is Coming"

Frost is underfoot, but soon there will be ice. Pay attention to problems now, as they are warnings of even greater problems yet to come. Issues addressed at this early stage will be much easier to deal with.

A strong construction and a stable foundation allow for a powerful structure to be built above. Directness leads to greatness. Do not take the roundabout path to your goal when the straightforward approach is necessary.

"For the Greater Good"

There are times to attract attention to oneself, and there are times when the self is less important than the good of others, or the good of the whole. Success and victory are not always personal victories. The modest person achieves greatness by supporting his or her peers.

Danger is associated with visibility here. Keep ones thoughts, writings and work under wraps until the danger passes. A time to keep secrets. Ideas and opinions should often be saved for the right moment.

Yellow symbolizes the earth and that which is authentic. Look beneath the surface to see what is real. Outward appearances are less important than that which lies beneath. A simple yellow garment is worn underneath. Modesty, integrity and simplicity will defeat flashy displays and superficial efforts.

"The Battle of Dragons"

A change in this line represents two dragons fighting. One is real, the other is a false dragon which will be defeated, but both will suffer injury. This is a battle which has been fought before -- and will be fought again.

The 2 Trigrams Inside Hexagram #2

In the case of hexagram #2, the upper and lower trigrams are identical. Bear in mind however, that one trigram can point to different interpretations in the top and lower positions.

Try a free I Ching Reading


iFate's completely free, online I Ching readings have been called "stunning", "profoundly insightful", and have received thousands of five-star reviews from all around the world.
Click here to consult the I Ching. »