The Meaning of the Number 1215 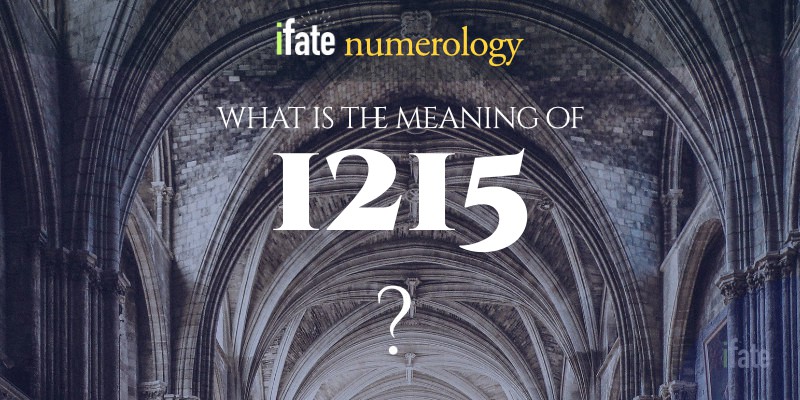 Complicated numbers like 1215 have identifiable properties according to the field of numerology.

The traits exhibited by each and every number are similar to the personality traits of complex people. When numerologists analyze the unique traits of any number, they can make determinations about how the number influences us — and the ways in which that number interacts with the world that surrounds it.

The numerological meaning of 1215

The four-digit number "1215" radiates an aura of compassion, artistry and a time of cyclical renewal. It's also a number that has a detectable altruistic sense to it, pulsating with auras of charity and appreciation for all of humankind. This elevated awareness for mankind often manifests in creative output and artistic genius. Its primary energy, which is decidedly conclusive — also has a caring or harmonious feeling .

NOTE: Keep in mind that from a numerology standpoint, 4-digit numbers like 1215 are more complicated than single-digit numbers. Like gem stones, numbers with multiple digits have many facets , each of which can refract energy in powerful ways. The more places or digits in a number, the more complicated and interesting its interpretation. In all cases, there is a primary meaning and a group of secondary, less significant traits contributed by each digit— which each are also relevant.

Some negative attributes of the number 1215

Some possible negative facets of 1215 to be aware of are less optimal fickle or insensitive energies.

For the most part — if you're uncertain about whether or not 1215 exhibits these negative traits, a good rule of thumb is: The characteristics of just about every number (1215 included) should be assumed to be non-negative until a time comes when any troublesome trait is apparent. That having been said — it's important to be aware of these potential negatives.

Some other negative words which sometimes resonate in the number 1215

Secondary numerological meanings of the number 1215

The digit 1: On a somewhat lesser-level, the digit 1 of 1215 also carries less defined, but still significant vibrations of willpower — and less intense traits of creative energy as well.

The digit 2: Further analyzing 1215, we uncover tertiary resonances of diplomacy blended with a nuanced radiance of balance.

The digit 5: If we take a look at the next sequential digit (5) in 1215, we can discern some very minor, but still influential traits which feel free-spirited and versatile. 1215 also pulses with curiosity at this depth.

So how do numerologists figure all this out for a number like 1215?

How to Interpret 1215 using Numerology

Read on to learn how you can get to your own fascinating interpretations of 1215 with numerology:

As we touched on at the top of the page, the radiance emanating from the interesting 4-digit number 1215 can be described as both caring and harmonious. These traits are brought over from 1215's numerological root number of 9.

NOTE: The term "numerological root number" and "numerological base number" are used interchangeably in this post. It is the reduced value computed by summing up the individual digits of the number 1215.

Because 1215 gets reduced using numerology to 9, let's jump over to a brief refresher about this base number:

The numerology number 9 is often a misunderstood number. It is the last 'pure' number in the numerical cycle from 1 to 9, it maintains an interesting place in numerology. The number 9 broadly represents the closing of cycles.

9 has a radiance of 'near completion' about it — and it also drops clues about the future of the next cycle. In stark contrast to the number 1, which represents the raw power of creation, the highly conscious number 9 adds the energy of 'cyclical endings' and a discernable feeling of closure.

Keep in mind though that with endings comes the idea of new birth and a future explosion of creative genesis.

Being a number that shares much in common with its numerological root number of 9, the number 1215 can be quite similar to many of 9's deeply conclusive energies such as being wise and artistic.

Would it be correct to say that the numerology meaning of 1215 is the same as its inner base number 9?

Not exactly, no. Interpreting multi-digit numbers isn't that simple.

If it were that simple, then loads of other numbers, which each share the same root number 9 (like the numbers 207 and 1242, or the number 6309 for example) would all share the same meaning.

The root number is like a blurry image of 1215's full interpretation. To really unpack the interpretation of 1215, we need to analyze its internal composite digits: 1, 2 and 5, and not just the base number 9 alone.

Additionally, because 1215 (taken with its base number 9) has one inner number that repeats, we're also going to need to consider the question of the repeating digit, but we'll cover that in a bit. For now, let's take a look at how each of the digits within 1215 can have an effect on the overall interpretation.

See the following chart which shows the relative contributions of the root number and the components within 1215:

Looking at the above chart, the dominant aspect of the number 1215 is the numerological reduction root of 9. Coming after the numerology root number, are listed each of the remaining digits in 1215, which each have decreasing importance.

In cases where there are repeat digits in a number (For example, in the case of 1215 together with its numerology root 9, the 1 repeats), the values of the repeated digits are shown combined for an increased overall influence. So even though there are a total of 5 influential digits (including the numerological root) influencing 1215, the graph above shows just 4 digits, with values joined in a single value to show their combined contribution to the overall significance.

So now that we've covered the primary influence of the numerology reduction digit 9, and discussed the individual weight of the compositional numbers 1, 2 and 5, we'll go over the inner numbers one at a time — excluding the 9 which we already discussed above.

The number 1 in numerology, is a primal force for creativity and creation. It is courageous, rebellious and pioneering.

The number 1's written shape represents its core characteristics: It stands vertical, tall and unwavering. It is a number of vision, rugged indivdiualism and clear direction.

The number 2 in numerology is a "base" number which represents a pacifying, synchronizing force which brings harmony to situations. This diplomatic number has a beneficial , harmonious effect and emanates an aura of cooperation. Whenever disagreements arise, the number 2 is a welcome and powerful force.

Often thought of as a female energy, for its calming but powerful characteristics, the number 2 excels at sympathy and emotional intelligence.

The highly mutable number 5 in numerology is the number which corresponds with change. Because it represents the central position of all the 1-digit numbers from 1-9, it is sometimes called the "pivot number", or the number which the other numbers move around.

5 is adapatable and forever-changing — capable of making it in almost any environment or scenario. It's ability to change makes it a socialite number, which can co-exist with nearly anyone.

The number 5 is also gifted with a an eternal sense of wonder, and never stops adventuring.

Remember, a significant component of numerological understanding depends on the place any given number like 1215 displays itself. Where, when and how a number appears, can affect its significance:

Every one of these possibilities are important because they add extra light on 1215's meaning, and how it has an effect on you and the environment around you.

What about numbers that are in an ID card or license?

Numbers like 1215 that show-up in an ID number, drivers license number, passport number or any other form of personal identification are some of the most revealing of all. Why is that? Because numbers on an ID card typically connect directly to the identity and character-type of one specific individual.

If you're single and searching for love right now, these types of numerological insights can be extemely useful. They impart interesting understanding of personality types, subconscious character traits and in other cases long term relationship and marriage compatibility.

If you're involved in business or commerce, the number 1215 might show up in a credit card, customer ID number or other form of customer identification. These types of insights often provide fascinating advantages as they give us a sneak peek at hidden knowledge that might otherwise not be visible.

Numbers which show up repeatedly

A number that comes up again and again is frequently a sign that there's something you should look into. Usually, it's nothing more than a casual reminder from the Cosmos, telling you to either take care of something or at least focus on something.

Also, keep in mind that any number like 1215 that crops up again and again may symbolize a repeat issue or problem for you. Case in point: a dating or romantic relationship issue which keeps coming up over and over again, may make an appearance numerologically with the repeated appearance of 1215.

Is the number 1215 showing up on a dating-website profile?

Numerologists who interpret the romantic possibilities of onine dating profiles frequently pay extra attention to user ID numbers, join dates and dates on which someone makes contact for the first time.

In case you're wondering, yes you can also do a traditional "name numerology" interpretation on online usernames.

While it's possible to do this — keep in mind that user names will always be significantly less relevant from a numerology standpoint than a reduction of a user's real name.

When numbers are part of, or connected to a birth date in some way, you're going to be better off paying attention to the classical numerology numbers like Life Path Number, Destiny Number, Inner Dream and Soul Urge numbers.

If you don't know these calculations, use iFate's free name numerology calculator to see them instantly.

Numbers that are a part of an apartment address or a postal code often have an influence on the inhabitants personally — or if it's a corporate address, on the culture of a corporation.

If 1215 is seen in part of a person's home address, it may also have some influence — negatively or positively — on the dating or relationship potential of the people staying there — or have an effect on the state of their current relationship.