The Meaning of the Number 128 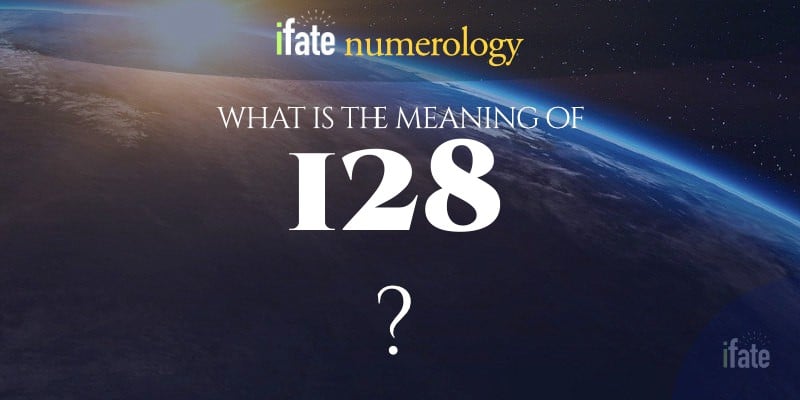 To those who study numerology, all numbers including 128 display their own characteristic attributes and character traits. When we analyze the attributes unique to this 3-digit number, we can understand how the number affects the world which surrounds it — and how its radiances affect people, the personalities around us and their behaviors.

What's the meaning of the number 128?

The three-digit number "128" vibrates with frequencies of empathy, mastery and understanding. This is also a number which refers to a special kind of equilibrium and motionless stasis. In these rare moments of motionless perfection, true inner vision and understanding are made possible. When this number appears it's often a sign to consider a special kind of harmony or symmetry that has manifested somehow. Its primary energy, which is known for being wise — has a kind of emotionally intelligent and intuitive feeling to it.

NOTE: Remember that from a numerology standpoint, 3-digit numbers like 128 are more complex than single-digit numbers. Similar to gem stones, longer numbers have multiple facets , each of which can sometimes scatter energy in powerful ways. The more digits within a number, the more complicated and interesting its significance. All multi-digit numbers have a primary meaning and a set of secondary, less influential traits contributed by each digit, which also contribute to the overall significance of the number.

Notable negative characteristics of 128 which may sometimes take prominence are less optimal stressed or unfocused auras.

For most analyses though — if you're not sure about whether a number is vibrating with negative frequencies, a simple approach is: The 'character-traits' which apply to every number including 128 should be assumed to be beneficial until a time comes when any problematic trait is apparent. That being said — it's useful to be on the lookout for these potential downsides.

More negative terms which can also resonate in the number 128

The digit 1: If we analyze the next digit (1) in 128, we can make out some less defined, but still significant traits which feel original and decisive. The number also resonates with an aura of initiative at this depth.

The digit 2: Interpreting the next digit (2) of 128, we uncover less significant auras of empathy combined with a much less intense radiance of calm.

The digit 8: On a very faint, but detectable-level, the digit 8 of 128 also has very distant vibrations of durability — and very distant, but still visible overtones of respect as well.

So how do numerologists extract these meanings from a number like 128?

How to Interpret 128 using Numerology

Read on to learn how you can get to the above analyses of 128 using numerolgical analysis:

Characteristics of the number 128

The first step in interpreting a number with multiple digits is to calculate its base number. When we reduce down the 3-digit number 128 numerologically, we can uncover its important Master Number of 11.

NOTE: The term "numerological root number" and "numerological base number" are used interchangeably in this explanation. It is the reduced value calculated by summing up the individual digits of the number 128.

Since 128 can be numerologically reduced to 11, let's do a quick refresher about what the base number means:

Unlike other multi-digit numbers which can be reduced to a 1-digit number, 128 is worthy of close inspection because it reduces to a two digit root number.

Each and every number in the Universe has its own distinct charactersitics, but some numbers have special influence. These special double-digit numbers are called "Master Numbers", and they are brimming with Universal energy.

If you see the special numbers 11, 22 or 33 show up, it's a good time to take a breath and look carefully. These rare and dazzling numbers which radiate masterful energy, are vital components of universal creation itself. 11 is called the "Visionary". 22 is called the "Architect". And 33 points to the embodiment of love and life energy.

As one of three influential Master Numbers, the number 11, which is sometimes referred to as the "Visionary", has a powerful insightful capacity.

This extremely "aware" number is both sensitive and spiritual, and exists in harmony with everything surrounding it. In a number of ways, the number 11 shares similar characteristics to the number 2: A number of communication, balance, harmonization and diplomacy. But the rare and masterful number 11 takes the skills of the number 2 to a new dimension of ultimate mastery — existing in awareness of the greater universe as a whole.

As with the wise qualities of the base number 11, its multi-digit cousin 128 is often described as emotionally intelligent, intuitive and supernatural. The vibrations of 128 can also be described as perceptive.

So can we say that the numerolgical meaning of 128 is exactly the same as its inner base number 11?

If it were that simple, then millions of other numbers, which share the identidcal numerology root number 11, like the numbers 542 and 2900, and the number 902 for example — would each share the exact same meaning. (Which they don't.)

The root number only paints the broad strokes of 128's meaning. To really understand the interpretation of 128, we need to analyze its internal composite digits: 1, 2 and 8, and not just the base number 11 by itself.

Take a look at this chart which shows the relative contributions of the root number and the components within 128:

As you can see in the above chart, the most influential dimension of the number 128 is the numerological reduction root of 11. Coming after the numerological root number, come each of the successive digits in 128, which each have decreasing importance.

The digits which make up 128

So now that we've covered the most significant influence of the root number 11, and discussed the percentage weight of the compositional numbers 1, 2 and 8, we'll dicuss the inner numbers one at a time — except for the reduction number 11 which we covered already above.

The number 1 in numerology, is a powerful force for initiation and creation. It is courageous, individualistic and filled with leadership qualities.

The number 1's written shape reflects its inner personality: It stands vertical, straight-up and unyeilding. It is a number of vision, powerful indivdiualism and courageous spirit.

The number 2 according to numerologists is a "base" number which represents a peaceful, synchronizing force which brings harmony to surrounding forces. This diplomatic number has a peaceful , harmonious effect and projects a positive energy of cooperation. If and when disagreements arise, the number two is both a welcome and potent force.

Often thought of as a female energy, for its gentle but powerful character, the number 2 is revered for empathy and understanding.

Where and when did you see the number 128?

Keep in mind, a significant component of numerological study depends on the place any number like 128 comes up. Exactly where and in what way a number appears, matters a lot:

Every one of these questions are worth thinking about because they each add an additional amount of light on the meaning of the number, and how 128 influences you and the world around you.

Any number that comes up repeatedly is potentially a sign that there's probably something you need to put more focus on. Usually, it's nothing more than a gentle nudge from the Universe, prodding you to either deal with something or at least look into something.

Bear in mind, any number like 128 that crops up repeatedly may reference some repeat issue or problem in your life. Case in point: a dating or relationship problem which keeps coming up over and over again, may show up numerologically with the repeat showing of 128.

Numbers that appear as part of a house or apartment address or a postal code have been known to have an influence on the residents — or if it's a corporate address, upon the culture of a company.

If 128 is part of a person's residential address, it may also have some influence (either positive or negative) on the love or relationship possibilities of the people living there — or have influence on their current relationship.

Numbers like 128 that show-up in an ID number, drivers license number, passport number or any other form of personal identification can be some of the most revealing . Why? Because numbers on an ID card typically relate directly with the identity and personality type of an individual.

If you're single and in the dating scene right now, these kinds of insights can be extemely useful. They impart deep understanding of personality types, hidden character attributes and in some cases, even long term compatibility.

If you're conducting business, the number 128 might show up in a credit card, customer ID number or other form of customer identification. These types of numerology insights provide fascinating advantages as they offer a sneak peek at information that would (under other circumstances) not be available.

Is 128 related to a dating-website profile?

Dating sites are always a rich area of focus for numerology — since sites like Tinder are absolutely filled with interesting numbers which carry numerological meaning.

Numerologists who pay attention to the romantic potential of onine dating profiles frequently pay extra attention to user ID numbers, join dates and of course, dates on which someone first "likes" you.

You can also do a traditional "name numerology" analysis on online user names.

While it's possible to do this — remember that account names will always be much less relevant from a numerology standpoint than an interpretation of someone's real name.

Whenever numbers are part of, or connected to a birth date in some way, you'll be better off working with the traditional numerology numbers like the Life Path Number, Destiny Number, Soul Urge number and Inner Dream numbers.

If you don't know how to perform these calculations, use iFate's free name numerology calculator to calculate them instantly.