The Meaning of the Number 2900 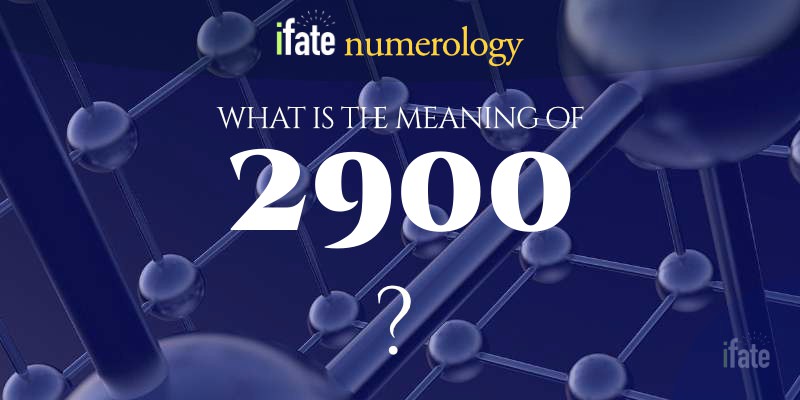 In numerology, each and every number like 2900 has character traits much like a person does. They each have distinct personalities, and a set of behaviors which differentiate them from every other number. If we study what each number's specific personality traits are, we can see how that number reacts with the world which surrounds it.

Looking from a numerological vantage point, the radiance contained within the 4-digit number 2900 is a decidedly intuitive energy. It resonates with well-defined frequencies of perception and marked resonances of psychic energy. This is also a number which points to a special kind of equilibrium and stasis. In these rare moments of motionless perfection, true perception and comprehension are made possible. When this special number turns up it's very often a sign to notice a special kind of harmony or symmetry that has manifested somewhere.

The number has a very emotionally intelligent feeling as well.

NOTE: It's important to keep in mind that from a numerology standpoint, 4-digit numbers such as 2900 are more varied and multi-faceted than 1-digit numbers. As with diamonds, numbers with multiple digits have many facets which can refract energy in powerful ways. The longer the number, the more complicated and interesting its interpretation. In all cases, there is a primary meaning and a group of secondary, less influential meanings contributed by each digit, which also hold some degree of relevance.

Although the above positive attributes are most common to 2900, that doesn't imply there are no downsides. The number can at times associate with negative anxious or overly worried resonances.

In most instances though ... if you're unclear about whether 2900 exhibits these negative traits, a general rule is: The facets which apply to any number including 2900 should be thought of as beneficial until a time comes when any problematic trait becomes clear. That having been said ... it's useful to be ready for these possible downsides.

More negative adjectives which may sometimes resonate in the number 2900

The digit 2: Diving deeper into 2900, we uncover less intense resonances of empathy combined with a less defined, but still significant radiance of cooperation.

The digit 9: If we focus on the next successive digit (9) in 2900, we can make out some nuanced traits which feel both caring and tolerant. The number also pulses with an energy of change and transition at this level.

The digit 0: On a very subtle-level, the digit 0 of 2900 also has very faint energies of possibility — and very faint, but detectable traits of potential as well.

So how do we figure out these meanings for a number like 2900?

How to Interpret 2900 using Numerology

Here's exactly how you can get to your own insights of 2900 with numerology:

Traits associated with the number 2900

Just to recap the primary meanings: The number 2900 is encircled by energy patterns that are both intuitive and emotionally intelligent. The number 2900's behavior is usually very perceptive and it gives off a decidedly supernatural energy.

Unlike most large numbers which can be reduced to a single-digit number, 2900 is special because it reduces down to a 2 digit base number.

Each unique number according to numerologists exhibits its own unique traits, but some numbers are influential at a whole other level. These extra-special double-digit numbers are called "Master Numbers", and they are extremely powerful.

When you see the rare numbers 11, 22 or 33 show up, it's a good time to take a breath and look carefully. These rare and powerful numbers which illuminate their surroundings with masterful energy, are important to heavenly creation itself. 11 is called the "Visionary". 22 is called the "Architect". And 33 is representative of the embodiment of love and life energy.

As the first of three powerful Master Numbers, the number 11, which is sometimes referred to as the "Visionary", has a powerful insightful capacity.

This deeply "aware" number is sensitive and mystical, and exists in sync with the world surrounding it. In some ways, the number 11 has similar personality traits of the number 2: A number of communication, balance, harmonization and intuition. But the Master number 11 takes the traits of the number 2 to a level of universal mastery — existing in awareness of the greater universe at large.

At this point you might be wondering, does that mean that the numerology meaning of 2900 is exactly the same as its associated base number 11?

If it were so simple, then trillions of other numbers, which each share the same base number 11, like the numbers 353 and 5600, and the number 7679 for example, would each share the exact same meaning.

The base number 11 gives us a very general picture of 2900's true meaning. To fully unlock the interpretation of 2900, we need to analyze each of its digits: 2, 9 and 0, and not just the base number 11 alone.

Furthermore, because 2900 (including its root 11) has one inner number that appears more than once, we'll also need to think about the issue of the repeating digit, but we'll discuss that in a minute. For now, let's discuss how each of the digits within 2900 influences the greater analysis.

Have a look at this interactive chart which illustrates the relative importance of the root number and the other digits within 2900:

As depicted in the above chart, the most influential aspect of the number 2900 is the numerological reduction root of 11. Following the numerological root value, are listed each of the remaining digits in 2900, each of which are assigned values of decreasing importance.

The duplicate number inside 2900

In the event that there are repeating digits in a number (In this case where the root of 2900 is 11 for example, the 0 repeats), the weights of the repeated digits are shown combined for a combined total influence. So even though there are a total of 5 influential digits (including the numerological root) influencing 2900, the graph above shows just 4 digits, with values added together to show their conjoined effect on the final meaning.

The inner digits which make up 2900

Now that we've gone over the most important influence of the root digit 11, and explained the relative weight of the inner numbers 2, 9 and 0, we'll explain the inner numbers one at a time — with the exception of the reduction number 11 which we talked about already above.

The number 2 in numerology is a "base" number representing a peaceful, stabilizing force which brings harmony to situations. This highly adaptable number has a beneficial , harmonious effect and is surrounded by an aura of cooperation. If and when disputes arise, the number 2 is a welcome and potent force.

Often considered a feminine energy, for its calming but firm characteristics, the number 2 is revered for sympathy and emotional intelligence.

The number 9 is an often misunderstood number. As the very last 'pure' 1-digit number in the sequence from 1 to 9, it occupies an interesting place in numerology. Nine generally marks the closing of cycles.

It has an aura of 'almost completion' about it — and it simultaneously drops clues about the future of the next cycle. As a counterweight to the number 1, which represents the raw power of creation, the harmonious number 9 adds the energy of 'endings' and a discernable sense of closure.

Remember though that with endings comes the message of renewal and a future explosion of creative growth.

The number zero is an unusual number in the practice of numerology. Zero is thought of more as an added attribute rather than a stand-alone number on its own terms. Zeri contributes the concept of the limitless and the unknowable. Infinite opportunity is represented, but also the potential pitfalls that come with the random and the unknown.

A big component of numerological analysis will depend on the place any given number like 2900 displays itself. Precisely where and in what way a number appears, matters a lot:

All of these questions are very important because they add additional clarification to the number's meaning, and how it applies to you and the environment around you.

Numbers which crop up again and again

Any number that makes an appearance over and over again is potentially a heads-up that there's a thing somewhere that you should take action on. It's a gentle reminder from your higher mind, reminding you to either take care of something or focus on something.

Bear in mind, a number like 2900 that makes an appearance over and over again may pertain to some repeat issue for you. One example might be: a dating or relationship problem which repeatedly pops up again and again, may show up numerologically with the repeat showing of 2900.

Numbers that are a part of a house or apartment address or a postal code may at times have an effect on the inhabitants personally — or if it's a business address, upon the business practices of a corporation.

If 2900 is part of a person's home address, it may also have some effect (either positive or negative) on the dating or relationship possibilities of the people living there — or have influence on the state of their current relationship.

What about numbers that are a part of an ID card or license?

Numbers like 2900 that show-up in an ID number, drivers license number, passport number or any other kind of personal identification can be the most revealing of all. Why is that? Because numbers on an ID card typically relate directly to the identity and character-type of a specific individual.

If you're single and looking for love at the moment, these kinds of insights can be invaluable. They offer fascinating insights into character types, hidden personality attributes and in some cases marriage potential.

If you're involved in business or commerce, the number 2900 might show up in a credit card, customer ID number or other form of business identification. These kinds of insights offer fascinating advantages particularly when they give us a sneak peek at information that might (under other circumstances) not be available.

Is the number 2900 related to an online dating or Tinder profile?

Online dating is a rich area of focus for numerological analysis — because apps like Tinder or OKcupid are full of complex numbers which carry numerological meaning.

Numerologists who pay attention to the romantic vibrations of onine dating profiles often pay extra attention to user ID numbers, join dates and of course, dates on which a profile makes contact for the first time.

Keep in mind that you can also do a traditional "name numerology" analysis on online usernames.

While you can do this — bear in mind that account names will always be much less relevant from a numerology perspective than an interpretation of someone's real name.

Whenever numbers are part of, or connected to a birth date in some way, you're better off applying the more traditional numerology numbers like the Life Path Number, Destiny Number, Soul Urge number and Inner Dream numbers.

If you don't know these calculations, use iFate's free name numerology calculator to compute them easily.