The Meaning of the Number 425 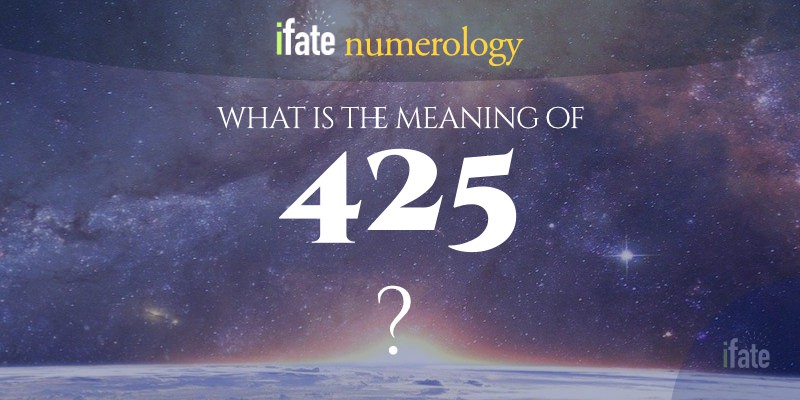 Complex numbers like 425 have specific qualities according to the study of numerology.

The traits displayed by each number are similar to the character traits of living beings. When numerologists study the traits of any number, they can make observations about how the number influences us — and the key ways in which that number interacts with the environment that surrounds it.

What does the number 425 mean?

The three-digit number "425" is surrounded by an aura of mastery, psychic energy and empathy. This special number also has deep within it the concept of a masterful balance between all sentient things. Natural elements are harmonized by this number, as are feelings, motivations, hopes and opposing energies. Its fundamental energy, which can be called wise — expresses a very supernatural and sensitive feeling to it.

NOTE: Remember that from a numerology standpoint, 3-digit numbers like 425 are more multi-faceted than single-digit numbers. Similar to diamonds, numbers with multiple digits have multiple facets , each of which can sometimes reflect surrounding energy and light in complex ways. The more places or digits in a number, the more nuanced and deeper its meaning. All multi-digit numbers have a primary meaning and an array of secondary, less significant characteristics associated with each digit— which each add to the overall interpretation.

Some negative attributes of the number 425

Aside from the aforementioned positive attributes, it's possible for 425 to show some negative traits including auras that are overly worried or anxious.

For the most part - if you're unclear about whether or not any number leans towards the negative side, a general rule is: The attributes which apply to any number including 425 should be thought of as non-negative until a time comes when a troublesome trait is clearly visible. However - it's worth it to know about these possible downsides.

Secondary meanings of the number 425

The digit 4: If we take a look at the next digit (4) in 425, we can uncover some less defined, but still significant traits which feel both patient and loyal. 425 also pulses with strength at this depth.

The digit 2: On a mild-level, the digit 2 of 425 also exhibits tertiary energies of empathy — and nuanced elements of sympathy as well.

The digit 5: Continuing to explore deeper within 425, we find very distant auras of adventure blended with a very minor, but still influential radiance of freedom.

So how do numerologists figure all this out for a number like 425?

How to Interpret 425 using Numerology

Keep reading and we'll show you exactly how you can reach your own insights of 425 using a numerological approach:

Positive characteristics of the number 425

The first step in analyzing a number with multiple digits is to calculate its base number. When we reduce down the 3-digit number 425 numerologically, we can reach its important Master Number 11.

NOTE: The expression "numerological root number" and "numerological base number" are used interchangeably in this explanation. It is the reduced value arrived at by adding the individual digits of the number 425.

Because 425 gets reduced using numerology to 11, let's do a quick refresher about 11, and how it influences 425:

Unlike other 3-digit numbers which numerologically reduce to a single-digit number, 425 is fascinating because it reduces to a two digit base number.

Each number in numerology has its own distinct charactersitics, but some numbers deserve special attention when they appear. These special double-digit numbers are called "Master Numbers", and they are powerful and radiant.

Anytime you see the exotic numbers 11, 22 or 33 make an appearance, it's a time to stop everything and look carefully. These rare and perfect numbers which radiate masterful energy, are glimpses into cosmic creation itself. 11 is the "Visionary". 22 is the "Architect". And 33 is representative of the embodiment of love and life energy.

As the first of three special Master Numbers, the number 11, also known as the "Visionary", has a powerful insightful capacity.

This extremely analytical number is sensitive and spiritual, and exists in harmony with the universe surrounding it. In many ways, the number 11 shares similar personality traits of the number 2: A number of cooperation, balance, harmony and intuition. But the Master number 11 takes the skills of the number 2 to a higher stage of universal mastery — existing in fine attunement with the greater universe as a whole.

As with the wise characteristics of the base number 11, its more complex relative 425 can be summarized as supernatural, sensitive and gifted. The energies of 425 can also be described as emotionally intelligent.

Would it be correct to say that the numerology meaning of 425 is indistinguishable from its inner base number 11?

No, we can't say that. It's not that simple.

If it were that easy, then other numbers, which each reduce numerologically to number 11, like the number 6401 or the number 2522 for example — would all have the exact same energy. (In fact, their meanings are different.)

The root number provides us a very loose definition of 425's true meaning. To really understand the interpretation of 425, we need to interpret each of its digits: 4, 2 and 5, and not just the base number 11 on its own.

It's easier to explain in this chart which illustrates the relative importance of the base number and the rest of the digits within 425:

As you can see in the above chart, the most important dimension of the number 425 is the numerological reduction value of 11. Coming after the numerological root number, are listed each of the remaining digits in 425, which each have decreasing importance.

Now that we've explained the most significant influence of the root digit 11, and discussed the individual weight of the compositional numbers 4, 2 and 5, we'll dicuss the inner numbers one at a time — excluding the reduction number 11 which we already discussed above.

The iconic number 4 in numerology is a number of solidity and simple power. Like 4-sided shapes including diamonds and squares, the number 4 represents a solid foundation and a dependable structure. The number 4 in numerology is a number you can count on. It's designed to last — capable of withstanding outside forces, while retaining its true shape and characteristics. It represents true friendship, persistence and a lasting truth you can count on.

The number 2 in numerology is a "base" number representing a peaceful, equalizing force which brings harmony to situations. This soulful number has an agreeable , harmonious effect and is surrounded by an aura of cooperation. When conflicts arise, the number two is both a welcome and powerful force.

Often thought of as a female or motherly energy, for its soft but powerful character, the number 2 is revered for sympathy and emotional intelligence.

Five is adapatable and mutable — capable of thriving in almost any environment or situation. It's mutability makes it a social number, which can co-exist with almost anyone.

The number 5 is also given to a naturally inquisitive nature, and never stops learning.

Where and when did you see the number 425?

One should note that a big aspect of numerological interpretation depends on the question of where and how any given number such as 425 comes up. Exactly where and how a number appears, can really matter:

Each of these questions are very important because they each add an additional amount of light on the meaning of the number, and how it applies to you and the environment around you.

Numbers like 425 that show-up in an ID number, drivers license number, passport number or any other form of personal identification can often be the most revealing . Why is that? Because these personal ID numbers usually connect specifically to the identity and character type of a specific person.

If you're single and looking for Ms. or Mr. Right , these kinds of numerological insights can be invaluable. They offer interesting insights into character types, concealed personality traits and in some cases, even long term compatibility.

If you're doing business or commerce, the number 425 might show up in a credit card, customer ID number or other form of customer identification. These kinds of numerological insights can offer fascinating advantages particularly when they offer a peek at hidden knowledge that would otherwise not be visible.

Does it matter when 425 is part of a birth date?

Whenever numbers are part of, or connected to a birth date in some way, you're going to be better off using the more traditional numerology calculations like Life Path Number, Destiny Number, Soul Urge number and Inner Dream numbers.

If you're not familiar with these calculations, use iFate's free name numerology calculator to view them easily.

Is the number 425 associated with a dating-website profile?

Dating apps can be a deep area of focus for numerology — because sites like Tinder are absolutely filled with fascinating numbers which carry numerological significance.

Numerologists who pay attention to the romantic auras of onine dating profiles frequently pay special attention to user ID numbers, join dates and of course, dates on which a profile first makes contact.

Many numerology students ask if they can also do a classical "name numerology" interpretation on online usernames.

While you can do this — remember that these names will always be much less relevant from a numerology perspective than an analysis of someone's actual name.

Numbers which crop up again and again

Any number that comes up in a recurring fashion is potentially a sign that there's a thing somewhere that you need to pay attention to. It's a gentle nudge from the Universe, telling you to either do something or at least pay attention to something. Bear in mind, any number like 425 that shows up in a recurring fashion may point to a repeat issue in your life. One example might be: a dating or romantic relationship problem which keeps coming up over and over again, may show up numerologically with the repeated appearance of 425.

Did 425 appear as a part of a street address?

Numbers that make an appearance as part of an apartment address or a postal code have been known to have an influence on the residents — or if it's a corporate address, upon the business practices of a business.

If 425 is seen in part of a person's residential address, it may also have some effect (be it positive or negative) on the romantic potential or relationship possibilities of the people staying there — or have influence on the state of their current relationship.