The Meaning of the Number 513 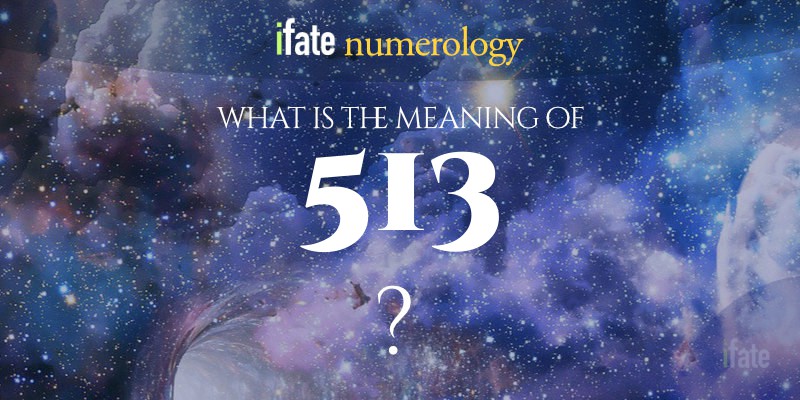 For numerologists, each number like 513 has character traits much like a person does. They have their own quirky personalities, and character-types which differentiate them from other numbers. When we learn what each number's unique character-type is, we can get an idea of how that number reacts with the world which surrounds it.

So how do we arrive at an interpretation for 513?

What does the number 513 mean?

The 3-digit number "513" radiates an aura of a time of endings, the end of a cycle and change and transition. It's also a number that has a defined humanitarian feel to it, pulsating with energies of oneness and consideration for all of humankind. This greater consciousness for mankind frequently reflects in creativity and creative outperformance. Its fundamental essence, which is considered conclusive — has a kind of artistic or humanitarian feeling to it.

NOTE: It's important to keep in mind that in numerology, 3-digit numbers such as 513 are more varied and complex than 1-digit numbers. As with cut diamonds, numbers with multiple digits have many facets which can sometimes reflect surrounding energy and light in complex ways. The longer the number, the more complex and multi-dimensional its significance. All multi-digit numbers have a primary meaning and a series of secondary, less influential traits coming from each digit, each of which have some amount of significance.

Even though the previously mentioned positive traits are most frequently exhibited by 513, that doesn't mean there aren't any downsides. The number can sometimes vibrate with negative pessimistic or insensitive energies.

Generally speaking — if you're not sure about whether or not any number leans towards the negative side, a good assumption is: The attributes which apply to every number (513 included) should be assumed to be beneficial until a problematic trait can be seen. However — it's worth it to be on the lookout for these possible negatives.

The digit 5: If we take a look at the next successive digit (5) in 513, we can see some somewhat lesser traits which feel both well traveled and energetic. The number also pulses with an energy of change at this level.

The digit 1: Exploring further inside the digits of 513, we discover mild resonances of creative energy combined with a tertiary radiance of initiative.

The digit 3: On a much less significant-level, the digit 3 of 513 also demonstrates very faint energies of creative power — and very distant, but still visible elements of enthusiasm as well.

So how do we extract these meanings from a number like 513?

How to Interpret 513 using Numerology

Keep reading and we'll cover how you can produce your own analyses of the number 513 using numerolgical analysis:

Positive characteristics of the number 513

The first step in reaching the interpretation of the 3-digit number 513, is to use the process of numerological reduction to reach its associated base or root number.

NOTE: The term "numerological root number" and "numerological base number" are used interchangeably here. It is the reduced value calculated by summing up the individual digits of the number 513.

Because the 3-digit 513 can be reduced using numerology to 9, let's do a brief review about what the base number means:

The 1-digit number 9 is a number which is often misunderstood. As the very last 'pure' number in the sequence from 1 to 9, it occupies a special position. 9 generally points to the closing of cycles.

It has an aura of closure about it — and it simultaneously drops clues about the future of the next cycle. As a counterbalance to the number 1, which represents the raw power of creation, the compassionate number 9 adds the idea of 'endings' and a greater sense of closure.

It is important to remember though that with closure comes the knowledge of new birth and a future explosion of creative growth.

513 and its numerological base number: 9

So does 513 have the exact same interpretation as 9? Not exactly.

If it were as easy as that, then thousands of other numbers which also share the same root number 9 — like the numbers 585 and 1584, and the number 5229 for example — would all share the very same interpretation. (Their meanings are different.)

The reason is, when we interpret a 3-digit number, the reduced root number really only tells us part of the overall picture. So while the principal energy of 513 has the same conclusive energies of 9: artistic, humanitarian and tolerant — as well as a decidedly wise energy — the compositional digits 5, 1 and 3 still matter to some extent.

Have a look at the following interactive chart which illustrates the relative importance of the base number and the rest of the digits within 513:

Looking at the above chart, the dominant dimension of the number 513 is the numerological reduction root of 9. Following the numerology root value, we step through each of the successive digits in 513, which are each interpreted with decreasing importance.

So now that we've covered the primary influence of the numerology reduction number 9, and explained the relative weight of the inner numbers 5, 1 and 3, we'll go over the inner numbers one at a time — with the exception of the 9 which we already covered above.

5 is adapatable and mutable — capable of making it in almost any environment or scenario. It's ability to change makes it a social number, which can get along with just about anyone.

The number 5 is also given to a an eternal sense of wonder, and never stops learning.

The number 1 in numerology, is a primal force for initiation and creative energy. It is aggressive, rebellious and pioneering.

The number 1's printed shape represents its character traits: It stands vertical, straight-up and unyeilding. It is a number of leadership, unique indivdiualism and courageous spirit.

The number 3 in numerology is among the 'pure' numbers from 1 to 10. This charismatic and talented number dwells in a world of original ideas and new directions.

3 is positive, spontaneous and fun. Its jovial energy can spread to other numbers surrounding it, spreading creativity along with its aura of new ideas and new opportunities. In situations where old ideas have failed or contacts have stagnated, the number 3 is a welcome blast of new energy and new concepts.

It's important to note that a significant component of numerological interpretation will depend on where and how any number pops up. Precisely when, where and how a number appears, can really make a difference:

All of these possibilities are meaningful because they each add clarity to the number's interpretation, and how it has an effect on you and the world around it.

Is 513 associated with a dating-website profile?

Dating sites are always an interesting area of study for numerological analysis — because sites like Tinder or Match.com are absolutely filled with unique numbers which carry numerological meaning.

Numerologists who interpret the romantic auras of onine dating profiles often pay special attention to user ID numbers, "Member Since" dates and dates on which someone first "likes" you.

Many numerology students ask if they can also perform a traditional "name numerology" reduction on online user names.

While it's possible to do this — bear in mind that created usernames will always be significantly less relevant from a numerology perspective than a reduction of a user's actual name.

A number that pops up multiple times is frequently an indication that there's probably something you should look into. Usually, it's nothing more than a casual nudge from the Cosmos, prodding you to either take care of something or at least pay attention to something. Bear in mind, any number like 513 that shows up multiple times may indicate a repeat issue in your life. One example might be: a dating or romantic relationship issue which persistently comes up again and again, may make an appearance numerologically with the repeat showing of 513.

Numbers that appear as part of a residential address or a postal code can have an influence on the inhabitants — or if it's a corporate address, upon the business practices of a business.

If 513 is part of a person's home address, it may also have influence — negatively or positively — on the love or relationship potential of whoever is living there — or have an effect on the state of their current relationship.

What about when 513 is part of a birth date?

Whenever numbers are part of, or connected to a birth date in some way, you'll be better off applying the traditional numerology calculations like Life Path Number, Destiny Number, Inner Dream and Soul Urge numbers.

If you don't know these calculations, use iFate's free name numerology calculator to see them instantly.

What about numbers that are part of a license or an ID?

Numbers like 513 that appear on an ID number, drivers license number, passport number or other form of personal identification can be the most revealing . Why is that? Because numbers on ID cards often connect directly with the identity and personality type of one specific person.

If you're currently single or dating right now, these types of numerological insights can be invaluable. They reveal deep understanding of character types, subconscious personality attributes and in some cases long term relationship and marriage compatibility.

If you're involved in business, the number 513 might show up in a credit card, customer ID number or other form of company identification. These types of insights can offer fascinating advantages as they provide a peek at information that would (under other circumstances) be conceealed.