The Meaning of the Number 605 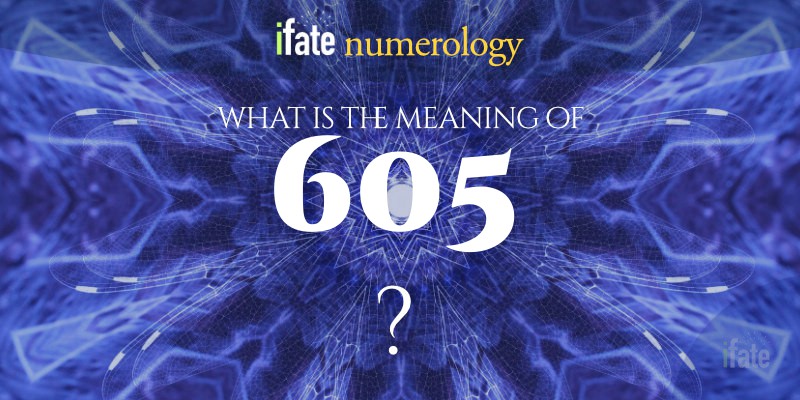 Longer numbers like 605 all have identifiable qualities according to numerology.

The characteristics displayed by each number are akin to the personality traits of human beings. When numerologists interpret the unique qualities of any number, they're able to make observations about how the number influences us — and the key ways in which that number refracts the world that exists around it.

The numerological meaning of 605

The 3-digit number 605 is a complex and interesting number when analyzed from a numerology point of view. It's primary vibrations feel noticeably gifted.

This special number also contains the idea of a supreme equilibrium between all sentient things. Forces of nature are brought into balance by this number, as are thoughts, interests, beliefs and competing forces. 605 can be recognized numerologically by its resonating energies of perception and psychic energy, which add to the number's natural sense of wisdom.

NOTE: It's important to remember that from a numerology standpoint, 3-digit numbers like 605 are more multi-faceted than 1-digit numbers. Much like crystals, numbers with multiple digits have multiple facets , each of which can capture surrounding energy and light in complex ways. The more digits a number has, the more complicated and multi-layered its meaning. All multi-digit numbers have a primary meaning and a series of secondary, less influential attributes coming from each digit— which each hold some degree of relevance.

Potential negative characteristics of 605 to make note of are the less optimal unfocused or overly worried traits.

In most instances though ... if you're unclear about whether or not a number is vibrating with negative frequencies, a simple approach is: The characteristics of every number including 605 should be thought of as non-negative until a time comes when a problematic trait manifests. That being said ... it's useful to be ready for any of these possible downsides.

More negative adjectives which can also apply to 605

Secondary numerological meanings of the number 605

The digit 6: Further analyzing 605, we can see less significant auras of care for others combined with a less intense radiance of fairness.

The digit 0: On a much less intense-level, the digit 0 of 605 also carries mild vibrations of possibility — and tertiary traits of potential as well.

The digit 5: If we read the next successive digit (5) in 605, we can uncover some very faint, but detectable traits which feel both well traveled and flexible. 605 also pulses with an energy of exploration at this depth.

So how do we know all this about a number like 605?

How to Interpret 605 using Numerology

Here's how you can arrive at your own fascinating insights of the number 605 with numerology:

Characteristics of the number 605

The first step in reaching the interpretation of the 3-digit number 605, is to use the system of numerological reduction to find its related root or base number.

The base number derived from 605 is the important Master Number:  11

NOTE: The term "numerological root number" and "numerological base number" are used interchangeably in this explanation. It is the reduced value calculated by adding the individual digits of the number 605.

Unlike most numbers which can reduce down to a single-digit number, 605 is interesting because it reduces down to a 2 digit root number.

Each and every number that exists exhibits its own specific charactersitics, but some numbers have outsized influence. These extra-special double-digit numbers are called "Master Numbers", and they are overflowing with special energies.

If you witness the exotic numbers 11, 22 or 33 appear, it's a time to take a breath and take special notice. These rare and powerful numbers which emanate an aura of special energy, are vital components of cosmic creation itself. 11 is called the "Visionary". 22 is called the "Architect". And 33 is representative of the embodiment of love and life energies.

As one of the rare Master Numbers, the number 11, or the "Visionary" as it is sometimes called, has a powerful insightful capacity.

This deeply "aware" number is sensitive and mystical, and exists in perfect synchronization with the universe surrounding it. In a number of ways, the number 11 has similar traits to the number 2: A number of communication, balance, harmony and intuition. But the powerful number 11 takes the traits of the number 2 to a new dimension of ultimate mastery — existing in fine attunement with the universe at large.

So does that mean 605 has exactly the same interpretation as 11? Not quite.

If it were as simple as that, then thousands of other numbers which also reduce numerologically to number 11 — like the numbers 425 and 4889, and the number 5321 for example — would each share the very same interpretation. (Which they don't.)

When interpreting a 3-digit number, the inner root number really only tells us part of the story. Even though the principal meaning of 605 has the same wise auras of 11: gifted, perceptive and sensitive — as well as a notably intuitive energy — the original digits 6, 0 and 5 still hold a degree of significance.

It's easier to explain in the following chart which shows the relative contributions of the root number and the rest of the digits within 605:

As depicted in the above chart, the most important aspect of the number 605 is the numerological reduction root of 11. Coming after the numerology root value, we step through each of the remaining digits in 605, which each have decreasing importance.

The inner digits which make up 605

The number 6 in numerology is the number of emotional depth and caring for others. This deeply emotional number is tied to a supportive demeanor and a true compassion for other people. The number 6 represents a dedication to humanity and to the environment — and it is closely linked to the ideas of caring, emotional intelligence and empathic ability.

The number zero is an unusual number in the field of numerology. It is thought of more as an influence rather than a stand-alone number on its own terms. It imparts the idea of the infinite and the unknown. Infinite potential is signified, but also the dangers that come with volatility and the unknowable.

The ever changing number 5 according to numerologists, is the number of change. Because it represents the absolute center of the single-digit numbers from 1-9, it is sometimes referred to as the "pivot number", or the number which other 1-digit numbers rotate around.

It is adapatable and forever-changing — capable of surviving in almost any environment or situation. It's changing personality makes it a social number, which can co-exist with just about anyone.

The number 5 also has a natural curiosity, and never stops adventuring.

Where did you come across the number 605?

Keep in mind, a significant aspect of numerological analysis depends on the question of where and when any given number like 605 pops up. Where, when and in what way a number appears, can affect its significance:

All of these possibilities are important because they each add additional clarification to the meaning of the number, and how 605 influences you and the world around you.

Are you seeing 605 popping up everywhere?

A number that pops up multiple times is often a heads-up that there's probably something you should look into. Most of the time it's a subtle nudge from the Universe, telling you to either take care of something or at least pay attention to something. Bear in mind, a number like 605 that turns up multiple times may point to some recurring issue or problem in your life. As an example, a dating or romantic relationship issue which persistently comes up over and over again, may show up numerologically with the reappearance of 605.

Did 605 appear as part of a street address?

Numbers that make an appearance as part of a house address or a postal code may at times have an influence on the inhabitants — or if it's a business address, upon the nature of a company.

If 605 is connected to an individual's home address, it may also impart (be it positive or negative) on the love or relationship possibilities of whoever is staying there — or have an effect on the state of their current relationship.

Is 605 related to an online dating or Tinder profile?

Numerologists who pay attention to the romantic auras of onine dating profiles often pay special attention to user ID numbers, "Member Since" dates and of course, dates on which that great match first makes contact.

You can also do a classical "name numerology" interpretation on online user names.

While it's possible to do this — bear in mind that usernames will always be significantly less relevant from a numerology perspective than a reduction of a user's real name.

Numbers like 605 that are related to an ID number, drivers license number, passport number or other kind of personal identification are often the most revealing . Why? Because these personal ID numbers typically connect specifically to the identity and character-type of a specific person.

If you're currently single and in the dating scene right now, these kinds of insights can be extemely useful. They reveal fascinating insights into character types, hidden character attributes and in other cases long term relationship potential.

If you're conducting business, the number 605 might show up in a credit card, customer ID number or other form of customer identification. These types of insights offer distinct advantages as they can offer a sneak peek at hidden knowledge that would (under other circumstances) be conceealed.

When numbers are part of, or connected to a birth date in some way, you're going to be better off using the more traditional numerology numbers like the Life Path Number, Destiny Number, Soul Urge number and Inner Dream numbers. If you don't know these calculations, just use iFate's free name numerology calculator to see them instantly.