The Meaning of the Number 925 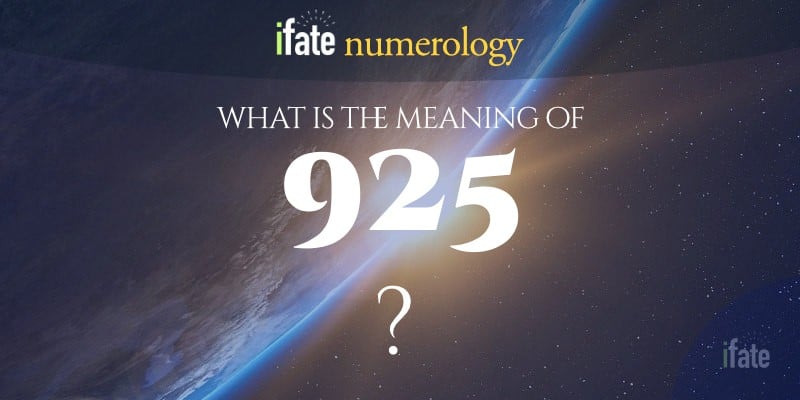 Every single number according to numerology has its own unique characteristics. For numerologists, numbers like 925 are like people — each with their own character-traits and little bevaviors which differentiate them from all other numbers .

Let's find out what's hidden inside 925:

What's the meaning of the number 925?

From a numerology perspective, the radiance contained within the 3-digit number 925 is a decidedly mystical energy. It resonates with clear patterns of truth and marked vibrations of wisdom.

The number 925 also has a characteristic poised feeling as well.

Bear in mind that from a numerology standpoint, 3-digit numbers like 925 are more nuanced than 1-digit numbers. As with shining jewels, they have many facets , each of which may reflect light and energy in complex ways. The more digits a number has, the more nuanced and deeper its interpretation. All multi-digit numbers have a primary meaning and a list of secondary, and even tertiary meanings coming from each digit, which also contribute to the overall feel of the number.

Possible negative attributes of the number 925

Even though the above positive attributes are most commonly associated with 925, that doesn't imply there are no darker sides to 925. The number may also vibrate with negative distrusting or too analytical energies.

For the most part however ... if you're unclear about whether any number leans towards the negative side, a good assumption is: The descriptive terms which apply to every number (925 included) should be assumed to be positive until a time comes when any negative trait manifests itself. That having been said ... it's useful to be ready for any of these occasional negatives.

Secondary numerology meanings of the number 925

The digit 9: Continuing to explore deeper within 925, we uncover less defined, but still significant resonances of wisdom blended with a less intense radiance of a time of cyclical renewal.

The digit 2: On a much less intense-level, the digit 2 of 925 also demonstrates nuanced energies of calm — and less significant harmonics of sympathy as well.

The digit 5: If we take a look at the next sequential digit (5) in 925, we can uncover some much less significant traits which feel both adventurous and adaptable. The number also vibrates with an aura of freedom at this level.

So how do we know all this about a number like 925?

How to Interpret 925 using Numerology

Keep reading and we'll cover exactly how you can get to the above interpretations of 925 with numerology:

Characteristics of the number 925

The first step in reaching the meaning of the 3-digit number 925, is to use the system of numerological reduction to find its related root or base number.

NOTE: The expression "numerological root number" and "numerological base number" are used interchangeably here. It is the reduced value calculated by adding each of the individual digits of the number 925.

The number 7 in numerology, is an eternal seeker of wisdom. This powerfully analytical digit is seldom contented by cursory explanations or 'easy to come by' answers. Instead, the number 7 references a soulful desire to to dive deep and find underlying truths and the real nature of the universe. While spirituality plays inseparable part of the number 7's energy, the number's principal energy is one of knowledge and the radiance of fact-based truth. 7 blends the spirtual and the factual in an eternal quest for analytical knowledge and the inner truths of our existence.

925 and its numerological base number: 7

So does that mean 925 has the exact same meaning as 7? Not really. It's more complicated than that.

If it were so simple, then many other numbers which reduce to the same root number of 7 — like the numbers 349 and 8386, or the number 6541 for example — would all share the identical significance. (Their meanings are different.)

In fact, when we interpret a 3-digit number, the inner root number really only reveals part of the overall picture. So while the principal interpretation of 925 shares the same wise auras of 7: mystical, poised and sophisticated — as well as a decidedly intuitive energy — the individual, compositional digits 9, 2 and 5 still hold some influence.

It's easier to explain in this chart which explains the relative contributions of the base number and the components within 925:

Looking at the chart above, the most influential facet of the number 925 is the numerological reduction value of 7. Coming after the numerology root value, are listed each of the successive digits in 925, which each have decreasing importance.

Now that we've gone over the most significant influence of the numerology reduction number number 7, and covered the percentage weight of the inner numbers 9, 2 and 5, we'll explain the inner numbers one at a time — with the exception of the 7 which we talked about already .

The 1-digit number 9 is an often misunderstood number. As the final 'pure' number in the sequence from 1 through 9, it occupies a special position. Nine broadly marks the final phase of cycles.

Nine has an energy of closure about it — and it also drops clues about the future of the next cycle. As a counterweight to the number 1, which represents the raw power of creation, the highly conscious number 9 adds the energy of 'endings' and a subtle sense of closure.

Remember though that with closure comes the idea of rebirth and a future burst of creative growth.

The number 2 in numerology is a "base" number representing a gentle, stabilizing energy which brings harmony to situations. This soulful number has a peaceful , harmonious effect and is surrounded by an aura of cooperation. If and when disputes arise, the number 2 is a welcome and radiant force.

Often considered a female or motherly energy, for its calming but powerful characteristics, the number 2 is revered for sympathy and emotional intelligence.

Five is adapatable and forever-changing — capable of surviving in almost any environment or situation. It's changing personality makes it a socialite number, which can strike up a conversation with just about anyone.

The number 5 also has a naturally inquisitive nature, and never stops adventuring.

Where did you come across the number 925?

It's important to note that a major component of numerological study will depend on where and how any given number such as 925 makes an appearance. Exactly where and how a number appears, really matters:

All of these questions are important because they each add additional light on the meaning of the number, and how 925 applies to you and the environment around you.

Are you seeing 925 popping up everywhere?

Any number that shows up over and over again is potentially a heads-up that there's a thing somewhere that you need to put more focus on. In most cases it's a casual reminder from the Universe, prodding you to either take care of something or at least look into something.

Numbers like 925 that are connected to an ID number, drivers license number, passport number or any other kind of personal identification are often the most revealing of all. Why is that? Because these personal ID numbers usually connect directly to the identity and personality type of an individual.

If you're single and looking for Ms. or Mr. Right at the moment, these kinds of insights can be invaluable. They reveal interesting insights into personality types, buried character traits and in some cases, even long term compatibility.

If you're involved in business, the number 925 might show up in a credit card, customer ID number or other form of business identification. These kinds of numerological insights offer fascinating advantages particularly when they provide an 'inside look' at information that might (under other circumstances) be hidden.

Numbers that are a part of a residential address or a postal code can have an effect on the residents personally — or if it's a business address, upon the nature of a business.

If 925 is seen in part of an individual's home address, it may also have some effect — negatively or positively — on the dating or relationship potential of whoever is living there — or have influence on the state of their current relationship.

Does it matter when 925 is part of a birth date?

Whenever numbers are part of, or connected to a birth date in some way, you'll be better off working with the classical numerology calculations like Life Path Number, Destiny Number, Soul Urge number and Inner Dream numbers.

If you're not familiar with these calculations, just use iFate's free name numerology calculator to calculate them easily.

Is the number 925 a part of a Tinder or other dating profile?

Numerologists who analyze the romantic vibrations of onine dating profiles often pay special attention to user ID numbers, join dates and of course, dates on which a profile first "likes" you.

Many numerology students ask if they can also perform a classical "name numerology" analysis on online usernames.

While some numerologists do this — bear in mind that created usernames will always be significantly less representative from a numerology standpoint than a numerology reduction of a user's actual name.