The Meaning of the Number 949 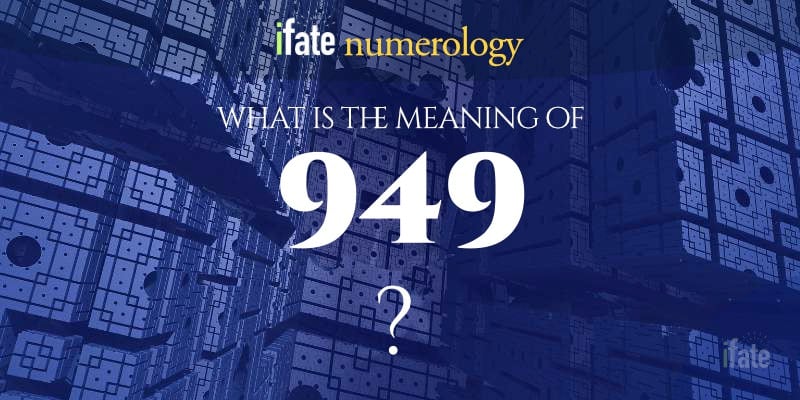 To those who study numerology, each and every number including 949 has character traits much like a person does.

They all have an identifiable personality, and a set of behaviors which differentiate them from every other number. When we learn what each number's unique personality traits are, we can get an idea of how that number refracts the environment around it.

So what's the numerological meaning of 949?

What does 949 mean in numerology?

When we look at this number from a numerology perspective, the radiance contained within the three-digit number 949 is a decidedly constructive energy. It resonates with clear frequencies of inception and strong vibrations of mastery. It's a number that is said to indicate making detailed plans and mapping out a big picture course for success. When this number appears it's frequently a subtle hint to either draw up plans for the future, or it's an indication of granular and meticulous strategizing that has happened here.

The number 949 has a very far-seeing energy as well.

NOTE: It's important to note that from a numerology standpoint, 3-digit numbers like 949 are more multi-faceted than single-digit numbers. Similar to diamonds, they have multiple facets , each of which can scatter surrounding energy and light in beautiful ways. The more places or digits in a number, the more complex and multi-layered its significance. In all cases, there is a primary meaning and a group of secondary, and even tertiary characteristics associated with each digit— which each add to the overall interpretation.

Possible negative aspects of the number 949

Even though the above positive attributes are most frequently exhibited by 949, that doesn't necessarily mean there are no darker sides to 949. The number can also associate with negative anti-social or uncaring resonances.

For the most part however - if you're unclear about whether or not 949 has these negative traits, a good assumption is: The descriptive terms which apply to every number including 949 should be thought of as positive and good until any problematic trait becomes clear. That being said - it's good to know about these possible downsides.

Some other negative words which may sometimes apply to number 949

Secondary meanings of the number 949

The digit 9: Diving even deeper into 949, we find less intense resonances of the end of a cycle blended with a secondary radiance of compassion.

The digit 4: On a lesser-level, the digit 4 of 949 also carries mild vibrations of durability — and tertiary elements of diligence as well.

So how do we extract these meanings from a number like 949?

How to Interpret 949 using Numerology

Keep reading and we'll cover how you can arrive at your own interpretations of the number 949 with numerology:

Characteristics of the number 949

As we touched on at the top of the page, the vibrations surrounding the interesting 3-digit number 949 can be described as both constructive and far-seeing. These characteristics are inherited from 949's numerological root number of 22.

NOTE: The expression "numerological root number" and "numerological base number" are used interchangeably in this post. It is the reduced value arrived at by adding the individual digits within the number 949.

Because 949 numerologically reduces to 22, let's jump into a quick review about what the base number means:

Unlike most numbers which can reduce down to a 1-digit number, 949 is special because it reduces to a two digit base number.

Every single number in the Universe exhibits its own unique traits, but some numbers exhibit remarkable qualities. These fascinating double-digit numbers are called "Master Numbers", and they are powerful and radiant.

If you see the exotic numbers 11, 22 or 33 make an appearance, it's a moment to stop everything and pay special attention. These rare and dazzling numbers which radiate an aura of special energy, are shards of cosmic creation itself. 11 is the "Visionary". 22 is the "Architect". And 33 points to the embodiment of love and life energy.

The vitally important number 22 is the second of the three "Master Numbers" in the study of numerology. 22 is frequently thought of as being the most significant of the Master Numbers. The Master Number 22 is also known colloquially as the "Master Builder" or the "Architect" because it signifies the transition of concepts into physical reality.

The powerful number 22 shares traits of both the initial Master Number, 11, which is deeply insightful and psychic — but 22 also shares the stable base and structure of the number 4.

When the Master Builder turns up in your day, you should regard it as a reminder from the Universe to plan big, think big and dream big. Don't get caught up in minutiae and tiny details. Consider the bigger, universal-scale perspective.

Because 949 is a number that shares much in common with its inner root number of 22, the number 949 also matches many of 22's strong, transformational energies such as being brilliant and transformative.

So can we say that the numerolgical meaning of 949 is exactly the same as its associated base number 22?

No, we can't say that. Interpreting multi-digit numbers isn't that simple.

If it were that simple, then millions of other numbers, which can be reduced to the same root number 22 (like the numbers 499 and 5656, or the number 1579 for example) would each share the identical significance.

The base number is like a blurry image of 949's true, detailed meaning. To really unpack the secrets of 949, we need to analyze its internal digits: 9 and 4, and not just the base number 22 alone.

Also, because 949 (including its root number 22) has one inner number that appears more than once, we should also reflect on the issue of the repeating digit, but we'll cover that in just a second. For now, let's discuss how each of the digits within 949 influences the greater analysis.

Take a look at the following interactive chart which shows the relative importance of the root number and the other digits within 949:

As depicted in the chart above, the dominant dimension of the number 949 is the numerological reduction root of 22. Following the numerological root number, we step through each of the successive digits in 949, which each have decreasing importance.

The duplicate number within 949

At times when there are repeating digits in a multi-digit number (In this specific case of 949 and its root number 22, the 9 repeats), the weights of the repeated digits are shown combined for a greater overall influence. So even though there are a total of 4 influential digits (including the numerology root) influencing 949, the graph above shows just 3 digits, with influences coalesced to show their greater effect on the final meaning.

The digits which make up 949

The numerology number 9 is often a misunderstood number. It is the last 'pure' number in the numerical cycle from 1 through 9, it maintains a special place in numerology. 9 broadly references the ending of cycles.

9 has a radiance of closure about it — and it simultaneously drops clues about the future of the next cycle. As a counterbalance to the number 1, which represents the raw power of creation, the harmonious number 9 adds the idea of 'finality' and a subtle feeling of closure.

Remember though that with endings comes the message of renewal and a future explosion of creative genesis.

The solid and powerful number 4 in numerology is a number of dependability and simple power. Like all 4-sided shapes the number 4 represents a solid base and a lasting structure. The number 4 in numerology is a number you can count on. It's built to endure — capable of standing up to outside forces, while retaining its integrity and characteristics. It represents loyalty, tenacity and an eternal force you can depend upon.

Where and when did you pick up on the number 949?

Always remember that a big component of numerological analysis depends on where and how any given number such as 949 makes an appearance. Precisely where and how a number appears, matters a lot:

All of these possibilities are worth considering because they add additional clarification to the number's meaning, and how 949 has an effect on you and the environment around you.

Is 949 showing up everywhere?

Any number that appears in a recurring fashion is very often a sign that there's something you need to take care of. It's a gentle tap on the shoulder from your higher mind, reminding you to either do something or focus on something. Also, keep in mind that any number like 949 that shows up in a recurring fashion may symbolize some repeating issue or problem for you. Case in point: a dating or romantic relationship issue which keeps coming up again and again, may manifest itself numerologically with the repeat showing of 949.

Does it matter when 949 is part of a birth date?

Whenever numbers are part of, or connected to a birth date in some way, you're going to be better off working with the traditional numerology calculations like the Life Path Number, Destiny Number, Inner Dream and Soul Urge numbers. If you don't know these calculations, use iFate's free name numerology calculator to see them easily.

What about numbers that are associated with an ID or passport?

Numbers like 949 that show-up in an ID number, drivers license number, passport number or any other form of personal identification can often be some of the most revealing of all. Why is that? Because these personal ID numbers usually associate directly to the identity and character-type of a specific individual.

If you're single and in the dating scene , these types of numerological insights can be extemely useful. They reveal fascinating understanding of personality types, subconscious personality traits and in some cases, even long term relationship and marriage compatibility.

If you're doing business, the number 949 might show up in a credit card, customer ID number or other form of company identification. These kinds of insights can offer fascinating advantages as they provide a peek at hidden knowledge that might (under other circumstances) not be available.

Numbers that are a part of a house or apartment address or a postal code can have influence on the residents — or if it's a business address, upon the nature of a company.

If 949 is connected to an individual's home address, it may also have some effect (either positive or negative) on the romantic potential or relationship potential of the people living there — or have influence on their current relationship.

Is the number 949 connected with an online dating or Tinder profile?

Online dating sites are an interesting area of study for numerological analysis — because apps like Tinder or OKcupid are absolutely filled with complex numbers which may contain numerological significance. Understanding the numerological meaning of numbers appearing in online dating profiles can offer amazing insights when you're searching for your perfect match.

Numerologists analyzing the romantic possibilities of onine dating profiles frequently pay extra attention to user ID numbers, join dates and of course, dates on which someone makes contact for the first time.

You can also do a classical "name numerology" analysis on online user names.

While it's possible to do this — don't forget that created usernames will always be significantly less representative from a numerology perspective than a reduction of a user's real name.